Sustaining a Remodeling Business with a Website and Google Ads

Kile Construction is a small remodeling company located in North Idaho. The owner, Norm Kile, has been a tradesman for over 40 years. He began his career as a framer at 16 years old. Norm usually works alone but has had up to 4 employees at a time since starting his own company. A normal project for him ranges from small handyman projects to whole-house renovations.

Norm gets most of his new customers by word of mouth. In the past, this has kept him pretty busy but in the early winter of 2019, he found himself wanting more work than he had. He hired Chuck at Adapt Digital Solutions to help him generate leads and keep him busy through the rest of the slow season.

Norm is the ideal remodeling contractor for a lot of homeowners. He is well established, knowledgable, and experienced. His business overhead is low so he’s able to price projects more competitively than some of the competition. His customers are working-class people who value high-quality work at a reasonable price.

We decided to use a two-pronged approach to his marketing. First, we would create a simple one-page website that focuses on his strengths and the qualities that made him an attractive contractor for homeowners in his local area. Next, we would use Google Ads to advertise his website and get people in touch with Norm when they were at the point where they are ready to hire a contractor.

Details of the Project

The website has a very simple one-page design with highly personalized text content, an image of Norm, and a few select pictures to highlight the type of work Norm does. Large call-to-action buttons are scattered throughout the page making it very easy for visitors to contact Norm when they are ready.

The Google Ads campaign focuses on only a few keywords. By writing ads that speak directly to someone looking to hire a contractor we cut out the people that were only researching home remodeling. We only wanted people to click the ad if they were actively searching for a contractor to hire now. It’s easy to spend too much on Google Ads if you aren’t careful about who you are targeting and what their intent is.

Even though the website has somewhat of a plain design, the results have been great. When we asked current customers why they hired Norm almost all of them cited the website being the number one reason for their decision. One customer said:

“When I looked at Norm’s website I just felt like he had the right experience for my project. I liked that he was well-established having been in the area for over 20 years. He also had great reviews on Google. Overall I just felt like I could trust him. When I finally met him in person I knew right away I had made the right decision. He came off as a professional person with lots of integrity.” – Happy Customer October 2019

For the website, this is exactly what we would hope to hear. For Google Ads, the numbers speak for themselves. In total Norm spent $104.24 on clicks in about 2 months which generated 4 leads, 2 of which turned into jobs. At the point where Norm won his second job, we paused the Google Ads campaign and won’t turn it back on until Norm needs more leads.

This is a screenshot straight out of the Google Ads (Adwords) Dashboard: 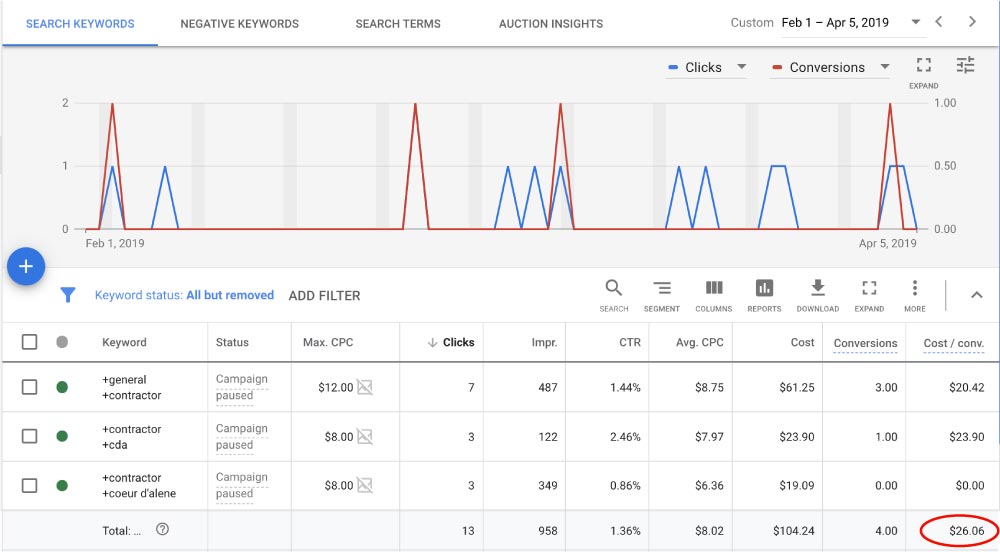 That time might not come for a while because his website has continued to bring in leads organically via Google Search. Since I incorporated SEO into this website build Norm’s website ranks well on Google Search and gets a good amount of online visitors without having to advertise. Since pausing the ads on April 5th Nor’s website has generated leads via phone calls and contact form submissions:

29 leads have come through the website organically since pausing the advertising. Had we generated these leads with Google Ads it would have cost $755.06.

Going into the following winter Norm’s schedule is full until next summer. We won’t be running Google ads this slow season.

With a small investment, Norm was able to generate plenty of customers to sustain his business. We did it by making smart moves and leveraging the qualities that make Norm a great contractor. None of this would have been possible if Norm didn’t provide high-quality work along with fantastic customer service. The hand-full of 5-star reviews Norm has got over the last 6 months is paying off and the entire marketing system continues to keep him as busy as he wants to be.

If you are curious about how you can get similar results for your business, then contact me today. I specialize in marketing for construction companies and can help you hone in on the perfect strategy to grow your business. A simple website like this can be built at a reasonable price so it pays for itself very quickly and will be a solid asset for you and your business.

What do you have to say about this? 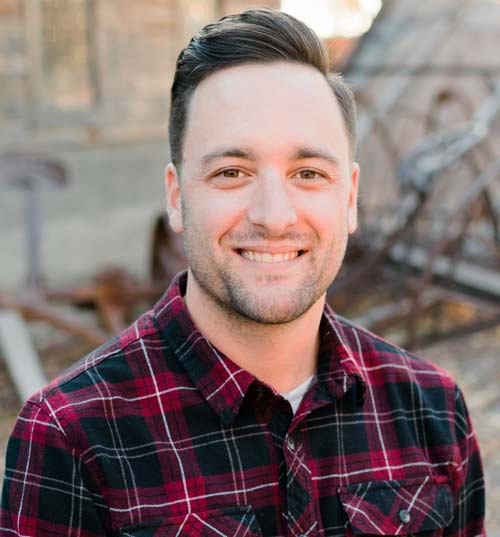